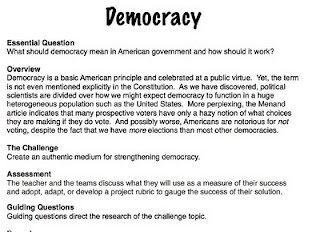 For the next few posts I will be reflecting on my Challenge Based Learning Project in AP American Government. The challenge:

Create an authentic medium for improving our democracy

As I reported in Leaving the Comfort Zone, my seniors greeted the project with genuine excitement. The first group meetings buzzed with conversation that was remarkably creative an purposeful. But before long, I began to suspect that the students were short-circuiting the challenge process. They were inclined to jump right to solutions, devoting too little attention to guiding questions and research.

Furthermore, after enthusiastically initiating Google Docs to log their progress, some groups were neglecting to record activity. Consequently I started losing confidence that meaningful progress was being made. A day of reckoning occurred when I decided to aggressively question the groups about their assumptions and progress. Later, members of one group told me that this helped "kick-start" them in the right direction.

I have three conclusions from this part of the cbl experience

1) Surprisingly, my first challenge topic was inspired and inspiring. I am already a little worried about coming up with another as good.

2) In the future, I need to set requirements for logging progress on the google docs. Additionally, I should ask groups to highlight text that is for my eyes. (In some cases I had trouble finding key milestones because there was so much text on the google doc).

3) I think it would be helpful to set up formal midpoint meetings with the groups. They were not aggressive about seeking input from me. While the groups need to be student-centered, without greater accountability, a certain amount of drift set in for a couple of groups.