Weekend Take-out from the Drive-thru 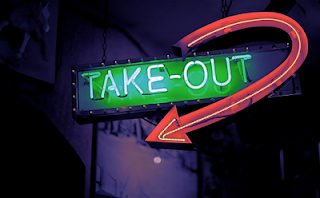 Over the summer I collected  news about several potential "disruptions" to the conventional ways that consumers, students, businesses access media and use technology.  It's important for educators to reflect on how these innovations might affect the lives of our students and our schools.

Google is adding a free e-mail feature that may persuade more people to cut the cords on their landline phones. The service . . . enables U.S. users of Google's Gmail service to make calls from microphone-equipped computers to telephones virtually anywhere in the world.
------------------

Some Companies, Which Barred the iPhone, Build Apps for Tablet Computer and Give Apple Gadget to Employees . . .sidestepping the resistance that the iPhone and other consumer-oriented devices have faced in the corporate environment. Indeed, many businesses have raced to snap up iPads.
------------------------------------

Apple's updated video vision falls in line with that of such competitors as Amazon's video-on-demand store and the free, ad-supported viewing available at the Web sites of the TV networks and Hulu, which is owned by some of them. All those offerings mean free viewers don't have to pay for things they don't want to watch -- unlike the traditional programming model, in which they subscribe for a large bundle of content and then proceed to ignore most of it.
--------------------------------

GEOFFREY A. FOWLER And MARIE C. BACA The Washington Post: "The ABCs of E-Reading":

New Devices Are Changing Habits. People Are Reading More, Even While in a Kayak . . . . Among early adopters, e-books aren't replacing their old book habits, but adding to them. Amazon, the biggest seller of e-books, says its customers buy 3.3 times as many books after buying a Kindle, a figure that has accelerated in the past year as prices for the device fell.
------------------------------

Netflix announced that it had struck a deal with cable channel Epix that will allow it to instantly stream more box-office hits. Sources tell the Los Angeles Times that in exchange for access to the Paramount, Lionsgate, and Metro-Goldwyn-Mayer digital libraries, Netflix will pay Epix $1 billion over the next five years, putting the cable company back in the black. Under the agreement, which goes into effect on Sept. 1, Netflix will be able to stream movies 90 days after Epix picks up the rights, or around the time that movies go to DVD. The deal will dramatically expand Netflix's instant-streaming catalog.