I Love My Digital Music 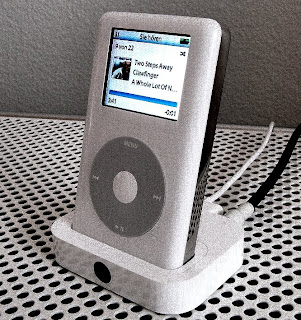 Not long after I got my first iPod, I made the rash decision to start digitizing my rather large CD music collection. This corresponded with another hobby of mine-- buying and selling for my collection on Ebay. I sold off a large portion of my CDs but continued to buy CDs in bulk on Ebay, digitizing the rock, jazz, and classical music that I purchased. This was a very economical way to build a rather enormous digital collection of music. (I no longer am a free wheeling trader on Ebay, but I still digitize most CDs that come my way).

I bought a Bose iPod player and added an iPod player to our stereo system. Suddenly, I was listening to much more of my own music, creating interesting playlists and listening to the catalogs of artists like Stan Getz, Miles Davis, and John Coltrane. Or placing all of Mozart's piano sonatas on a playlist and listening straight through over several day's time. I was willing to trade off some fidelity in the sound for the convenience of playing the music and plumbing the collection.

On the first day of school this year, we had a get re-acquainted ice breaker. Each of us had to divulge a "secret" about ourselves. I told about my music collection and remarked that when others are not around, I like my music LOUD. I've now taken this a step further. A good chunk of my music collection accompanies to school in my Macbook Pro. I arrive pretty early this year, and I play my music...loud. I usually dial it down a tad as the students start arriving. But I usually play it right up until first hour starts. I try to squeeze in a song between first and second hour too. If I have a free period, I sometimes play some piano jazz or something else that is soft. But I enjoy the relaxation, ambience, and self-expression that comes from this new wrinkle. It helps to keep me going!