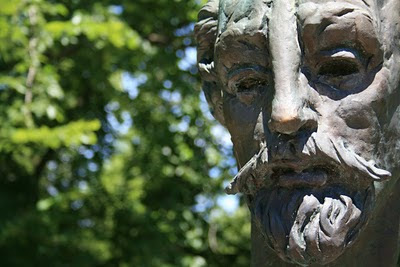 I am re-posting favorite entries from 2009. This one first appeared in June, but I have included this new, cool jpeg.

My 32 year relationship with Shakespeare class has far surpassed the average length of a marriage in this country. So without apology, he and I embark on a trial separation. Because some of our children (former students) are startled, I'll offer a few words of explanation. Divorceguide.com has helped me sort out the reasons:

Cheating
I don't think I ever cheated my students, but this year I cheated on the Bard. I had the sense in class that I was performing. All modesty aside, these were good performances, but I could almost see myself teaching as I taught (not good). Though I continually vary the plays, after teaching some 60-70 sections of the class some of the genuine excitement of sharing is gone. It's not Shakespeare, it's. . . .
Boredom
I'll admit it. I am tired of teaching literary papers and truly sick of reading them. I'm not proud of this, but it's hard work, and I have paid my dues. It's better to adjust than to simply become altogether bitter and cynical.

Commitment problems
Well , as I cataloged in Making Headway, I have been busy-busy with technology and connective learning. Throwing over the Bard for such a thing has penalized me among our mutual friends (see Shell Shock). And I admit to losing focus on day to day teaching but only because I have been more focused on learning. (And as the world "flattens", won't the better learners be better teachers?).

Change in priorities
I love all my courses, but right now I am fixated on revving up my AP American Government & Politics course with vlogging and a digital anthology. I needed to trim my preps to give this proper focus.

I'll be going to see Macbeth at Stratford in a couple of weeks, and I will still be using that play in Lit into Film. So William and I are still friends. The course will be in great hands with Mike G. And who knows, I might find my way back to Shakespeare class some day. But when I've separated from other great loves in my life like coaching basketball and teaching Dickens, I never went back.

I need this kind of change as a teacher. I'm not remotely burned out-- and after 34 years, I still don't complain when September rolls around. So farewell, Shakespeare. It's been great.

The Bard himself said it best: "Parting is such SWEET sorrow." As a teacher who has many more years to go before retirement, I'm on a quest in search of the holy grail -- a way to make the exhausting task of grading writing more manageable!