I Love Being Lost in La Mancha 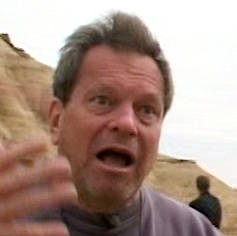 Ordinarily creating a study guide for students is a bit of a chore. However, I've always enjoyed fashining guides for my Lit into Film class. When Tom S. and I created the class a few years ago, we both thought it was pretty important that students have a guided viewing of the films, so that they would be prepared for discussion. Since we selected films that we really liked, it was no chore to comb through them for good discussion topics.
Two years ago, I began to convert my guides to Google Docs with hyperlinks, so that they popped out with YouTube and jpeg examples of film techniques that were merely defined in prior semesters. Putting the guides on Google Docs also allowed me to link them easily to Moodle.
This summer I have begun to improve the guides by using the screen capture software, Volia. I recently completed a study guide for Lost in La Mancha, a film directed by Keith Fulton and Louis Pepe which "chronicle[s] the making of a movie that was never actually completed . . . Terry Gilliam's repeated (and repeatedly failed) attempts to bring the story of Don Quixote to the big screen." It's a wonderful documentary, a genre unappreciated by most students.
Voila has permitted me to inch through the film and pull out illustrative images from La Mancha. Viola allows for publishing directly to iPhoto, where I edit them before import the photos into the guide. I am very pleased to show off my handiwork and look forward to more summer fun with Voila:
Lit into Film Study Guide for Lost in La Mancha
---------------------------------
Terry Gilliam on location in Spain-- Voila screen capture from Lost in La Mancha.
Posted by Detroit Sports Dork at 5:50 AM

Thanks for the tip--I'm TA-ing a film course in the fall and this idea sounds great, particularly since the prof seems disinclined to go with a standard film textbook of any kind.