An Assembly, a Career Day, a Suggestion

In September, we had the grand opening of our new science wing. There was reason to celebrate: the building project was completed on time, the upgrades were impressive as well as necessary, and even if most of the funds were raised before the Recession hit, it was nice to be spending instead of cutting on a project.

The ceremonies were quite conventional, right down to the giant scissors doing the ribbon cutting. Honored guests were invited and an alumna fromm the Detroit Medical Center was invited to make a keynote address at a school assembly. I confess that I expected boilerplate, but it was actually an outstanding challenge to the young women of our all girls school to find careers in science. Accompanied by some good slides and short videos, the speaker made science sound exciting, challenging and vital. As I was leaving the auditorium, I thought of everyone returning to the school day, and then their respective weekend activities, and wondered how long the great message we had heard would last. Now that it's November, of course the message has dissipated.

Now for a technoligy theme to which I continually return. Why, after our students have experienced a great face-to-face session like this one, aren't we plugging them into online resource centers which can connect them with information and professionals who could continue to feed the flames of their curiosity? Every two years we have a career "day". I think it's a fine concept. Alumnae come to the school, the students sign up for particular careers, and they attend three presentat 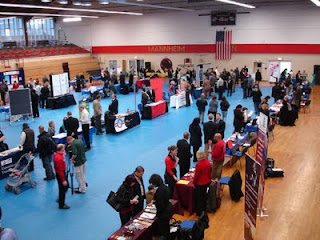 ions. Usually included is an assembly (not unlike the one described above) featuring a career woman who urges our young women to set their sights high.

It is obvious to me that we now have convenient tools for sustaining career education and networking our students with career women.

Wouldn't it be great if the academic departments, the counselors, the administrators, the parents clubs, and alumnae participated in a career wiki or Ning? With a decent effort on everyone's part we could have a fabulous resource in no time. I certainly would not want to replace Career Day, but such an endeavor would go far to bridge the 729 days between each one.

Posted by Detroit Sports Dork at 5:59 AM

I think that's an excellent idea, connecting alums and students to careers via social networking and wikis.

From my experience at Mercy 5 years ago, students didn't seem to take Career Day that seriously. A lot of them saw it as an optional day off. Does the same apply to Mercy girls nowadays? Do you think they would treat a Career wiki or Ning in the same way (i.e. neglect it)?

I would say that there has consistently been a spectrum of response to Career Day. Some students lack the maturity to see the relevance and obviously some parents aren't supporting it if they allow the day off. But a large portion take it seriously. As far as the wiki or ning goes, I've encouraged my government students to "think outside the box in doing their challenge based learning projects. Such a wiki would be of great utility for them in finding alumnae experts in politics, law, etc. If the teachers saw this as a research resource it would be used big-time.

I think it's a great idea, Larry!
-Jen Stark