Self-Stoppers (Anxiety as an Impediment to Change) 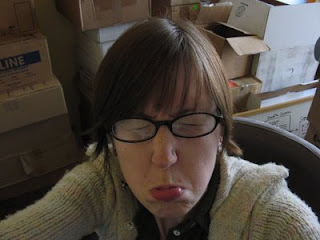 I was recently reading Bend without Breaking by Jim Huling. Though directed at a business audience his comments really ring true for schools as well. Some folks bristle at the mention of new technology because they seem to feel that they "must master every aspect immediately." Huling urges us to counter this anxiety by "building a plan for the daily or weekly improvements."

I know teachers who feel enormously pressured to change, and their anxiety seems to paralyze them. Most of what I've learned with tech has come very deliberately. I've become competent with tools like Moodle, Google Docs, and iMovie by using tutorials through Atomic Learning, completing a few modules each day. This gives me the sense that I am making progress. And by focusing on one tool at a time, I feel less overwhelmed.

On a related note, I've often hear the lament that things are changing so fast, that by the time one gets started on something, it will probably be outdated. Well, there is an element of truth to this. Topics that I presented on in January have already drastically changed by July. But rather than paralysis, this calls for learning a "tool set." By playing around at popular sites like iTunes, Facebook, Flickr, YouTube, and WikiSpaces one can see that A) One can get around one these sites without a computer engineering degree. B) There is considerable transference of competency from one site to another. As I've often remarked, it's easier to jump into the Read/Write Web now than ever before. Despairing that one is hopelessly behind is a pretty lousy excuse for not engaging in the here and now.

I find my usual habit of procrastination (I know, but it's hard to break after 50+ years!) is what does me in. I think a plan is crucial...since it does take time to actually go through the modules and make some headway. However, if you look at the actual amount of time spent...it's not too bad. Many tech applications are more quickly learned than taking up a new hobby or sport and becoming proficient those. However, unless it becomes "fun" or intriguing, most of us look on it as just one more task to accomplish or "slog" through. The expectation is worse than the actuality...but I think that's what causes the hesitation. You inspire me to really look forward to the learning!

Thanks, K. It makes a huge difference to me if I have a motivation to got through the atomic learning in order to gain a competence with the application. iMovie is a good example. I needed to submit a movie for my ADE application and I decided I wanted to improved some of my video presentations in class. After a week gradually going through the modules, I then immediately "practiced" with the projects and felt really good about what I had added to my bag of tricks. The projects helped to lock in the tutorials and gave me the motivation I needed.

Mr. Baker, I completely agree here. This summer, I have been working with the Adobe Creative Suite 3 package. Sure, I used some of the programs for Newsprint, but there's so much more to this suite than anyone could imagine. At first, I thought that there was absolutely no way I could learn how to use everything, but then I decided to take it one program at a time, one tool at a time. This is a headache-free approach for me. (When I first got the package, I tried to learn everything at once--watched tutorial after tutorial for all the programs...imagine the headache and frustration I had afterward!) What helped me the most was learning the terminology. Once I learned the names of tools, I taught myself their functions, then, when I watched tutorials, it was like a walk in the park. If we just take the time to sit down and learn, the process won't be difficult.

Utilizing what technology has to offer is crucial during these times, and can help a great deal in trying to land a job...at least that's what I hope it will do for me.

P.S. Can't wait to get my Mac so I can start working with iLife! Sounds like loads of fun!

You will LOVE iLife '09. If an artistic clod like me can enjoy it, imagine how much fun a truly talented person like you can have!