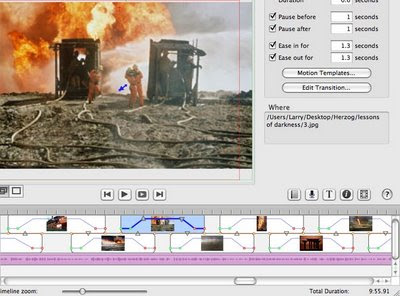 Jpeg Joy
I've kicked off my summer vacation with a flurry of jpeg activity. Before I begin my show 'n tell, I should remark that I received lots of classroom compliments for the iPhoto calendar I whipped up for S-7. This creation came in the wake of the "Ann Arbor" Images book that I described in My Friend, Flickr. Also I am pleased to report that I have now converted all my Lit into Film guides into hyperlink format (See Hyperlink Heaven).

Recent Developments!
For the past two weeks I have been dropping jpegs into movies. My first effort was a film review of Orson Welles' Touch of Evil. I enjoyed dropping the jpegs into iMovie so much I have the notion of adding a "Five Star Review" to my web site each month. When I told fellow Web Warrior, Rick Strobl, what I had been up to, he tipped me off on an application that sent me off on a bender. I've completed my last two jpeg movies with PhototoMovie (Check out the free trial). In an afternoon I completed an eight minute movie for my film class on documentaries. Basically it's a podcast with jpeg illustrations. Obviously, for a film class, this has tremendous advantages. But I also wish to try it with my government classes and will check back in next week after I am done raiding the public domain jpegs at the Library of Congress!

Posted by Detroit Sports Dork at 5:58 AM

I'm interested in your use of "Garage Band" for your audio tracks... I've never used that application... How did that make your projects easier?

Ah, perfect timing! I am actually drafting a blog post about "putting the puzzle pieces" together for one of my movies and Garageband is prominently featured.

In short, Garageband is amazingly useful for creating podcasts. In this instance I took an old mp3 that I created for my gov class, loaded it into GarageBand, updated it with Obama references (good-bye Bush), and cut it down to under 10 minutes for YouTube. I put the spiffed up mp3 into PhototoMovie and added public domain photos. Uploaded to YouTube. Presto! New Movie! Much better than old mp3. Part Baker/part Stroble/part Library of Congress. Good mix!