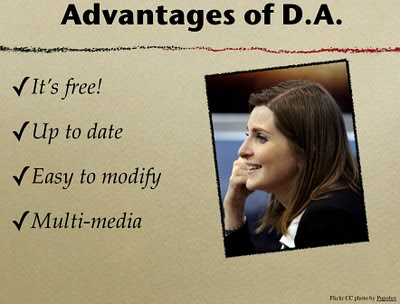 Last year, my major project for the summer was for my AP American Government and Politics class. I posted this plan at that time:
I am using Google Docs to collate my materials. The hyperlink feature (see Hyperlink Heaven) allows me to pull all the resources into one space. After seven years I have a pretty clear idea of the kinds of topics I want to include for my students. As I pull together the resources, I also compose critical thinking topics, which I compose in a different color text)
Next school year, besides saving my students fifty dollars, I will break by anthology into course packs which correspond to each unit. Students will have direct links to the resources with attendant topics to write, vlog, blog about (according to instructions).
The plan succeeded in nearly every respect, and I promoted the concept at MAME 36 and to our school staff on in-service day.
But since the strength of the anthology is its ability to stay current with events, it was time for an update. While I did add materials on the fly during the school year, I usually just bookmarked them for later consideration. By last month the bookmarks had accumulated to over fifty, and I felt like a slacker. But I'm glad that I procrastinated. As I sifted through the bookmarks last week, I found that many of the articles which had seemed very interesting a few months ago, already had lost their zest.
The anthology is organized into seventeen chapters which correspond to our text (available as an ebook of course!). I added material to eight of the chapters and deleted many old pieces, so I am pleased with the new level of currency. But I also have two regrets:
1) I could sense as I was adding some interesting sources to the later chapters of the anthology that they would probably not seem so great when we are finally ready for them in 2011. But the day to day time-consuming tasks of classroom teaching make it pretty difficult to freshen the anthology a priority during the school year.
2) I only added two multi-media resources to the updated anthology. This was also due to very practical reasons-- it is much easier to browse an article than a chunk of television program or a podcast.
Despite these regrets I am happy to share a slice of the 2010-11 Digital Anthology. (The red text describe the assignments which correspond to the resources.)
Chapters 8-10 of Baker's Digital Anthology for AP Gov
Feedback is welcome!
------------------------------------------
Screen Capture from MAME 36 "Digital Anthology" presentation.
Posted by Detroit Sports Dork at 5:50 AM