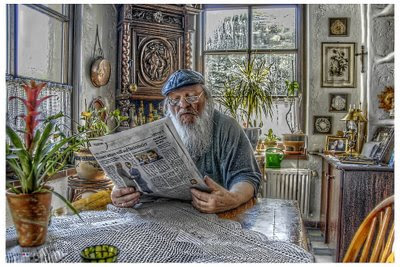 Dramatic blog title? It's not totally off the wall. As a resident of Southeastern Michigan I have been following the wrenching decline, diminution, and possible deaths of GM and Chrysler with anxiety and fascination. When an acquaintance from Massachusetts referred to this process as "creative destruction", I considered it callous, even offensive.

On the other hand, I think I have been guilty of the same emotional distance as I have followed the Newspaper Death Watch. I spoke often and openly with the journalism students in my AP Government classes about their pursuit of a rapidly evaporating dream.

I was jolted out of my emotional disconnect from old media death-throes when the Ann Arbor News suddenly announced it would cease publication in July. Grandfather Baker worked for Booth newspapers his entire career and ultimately became editor of the Ann Arbor News. The end of the paper seems a slight against his memory.

But the problem seems so obvious, doesn't it? How could the a business model based on the processing and physical delivery of ink-on-tree-pulp to the nation's doorsteps be sustainable? The high-speed internet kicks the traditional newspaper's butt on the all important issues of immediacy and cost. But naturally, many of us are concerned real journalism will die along with the old media. Might this not have dire consequences for our democracy?

In Sunday's New York Times (which I read online of course) Frank Rich reflects on these very issues. In a piece entitled "The American Press on Suicide Watch" he chronicles the industry's "self-destructive retreat from innovation" and suggests that newspapers might survive this technological revolution, just as the movies adjusted to tv and music evolved in a post-Napster world. His darkest concerns focus on the future of investigative journalism and the inability of "blogs" to substitute for true reporting:

Opinions, however insightful or provocative and whether expressed online or in print or in prime time, are cheap. Reporting the news can be expensive. Some of it — monitoring the local school board, say — can and is being done by voluntary “citizen journalists” with time on their hands, integrity and a Web site. But we can’t have serious opinions about America’s role in combating the Taliban in Pakistan unless brave and knowledgeable correspondents (with security to protect them) tell us in real time what is actually going on there. We can’t know what is happening behind closed doors at corrupt, hard-to-penetrate institutions in Washington or Wall Street unless teams of reporters armed with the appropriate technical expertise and assiduously developed contacts are digging night and day.

Personally, I think the best chance of something like our old newspapers surviving is Kindle. Last week Amazon introduced the Kindle DX, which may set the standard for newspapers, magazines, and books the way iTunes has done for digital music.

What does any of this have to do with education? Much. In the short term, teachers can enjoy the tremendous windfall of free information being provided by old media as it offers free content online in order to lure advertising . Without this free-for-all my digital anthology project would be much more difficult.

But how different is the education "old school" mind set from "old mainstream media" titans who steered their industry into the rocks. "Old school"continues to privilege ink-on-paper, brick and mortar, one teacher to 30 students. Administrators treat school calendars and schedules as sacredly as the old-time newspaper editors treated "deadlines".

But news doesn't stop happening at deadlines and learning doesn't stop when the bell rings. Most in the ed establishment still conceive of teaching as something that happens when an old guy like me stands in front of students at desks and delivers lectures from the podium. For them, "technology" means the old guys does death-by-PowerPoint instead of death by chalkboard.

Since education is so heavily subsidized by public funds, it's not on the verge of dying as my teaser implies. But how can we suppose that a process so stale and outmoded can contribute to a thriving society which competes in a flat world of rapid change? We risk a great deal by clinging to the old ways.

This is a great topic. Yes... Keep one eye on the "Kindle." What a great project for the "Newsprint" kids. I believe you can "upload" content to a Kindle via USB (Amazon offers free conversion of popular file formats like PDF and HTML to Kindle's "AZW" format through an e-mail service). What an "edge" skill for your students!