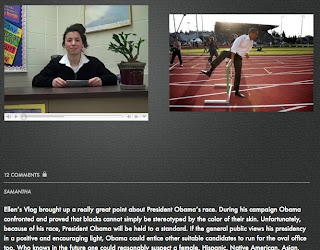 Last year I proudly shared some of the features of my tenth grade online course with my associate principal. He gave me the positive response I was hoping for and then exclaimed something like, "I bet you are really going to town with your AP course." Well, uh, no. This year and last, I've taught four courses, and even though my AP American Gov & Politics class is populated with curious, motivated seniors, I've integrated less technology than my other courses.

There is one good reason for this: The seniors don't have laptops like my other students. But I confess that I have also been concerned that straying too far from a traditional format may harm their scores on the AP exam.

But I made one major tech incursion, last year. I required each student to watch a documentary film of her choice, post a podcast review of the film to Gabcast, and then review two other podcasts. This year the reviews will be posted online.

This year, my most exciting use of tech has involved video. I began by loaning students my Flip Mino. They would go off and record a 3-4 minute vlog. After I uploaded their clip to an Apple me.com site, the other students would view it on their own time. Then we would all discuss it in class on a designated "blowback" day. This was fun, but our big breakthrough came three weeks ago

Inspired by my colleague Steve's successes with blogging, experiments with blogging, I suggested to the students that we blog about the vlogs. iCal and iWeb turned out to be the perfect tools for this. We have vlogging/blogging schedule on our an assignment calendar. Students know when the vlogs will be posted (weekly) and blog withing a prescribed time frame. Our site is attractive, password protected, and user friendly. Students access their links through Moodle.

Most importantly, the videos and compositions have been terrific. I loved the political analogy to our woeful local football team in the following excerpt:

'The significance of President’s Obama inauguration is unquestionable from a historical standpoint, although the public support displayed there will not necessarily stay with him throughout his Presidency. Allegra noted that Obama will have a dedicated following throughout his administration, and there is no doubt that such a following will exist. Even President Bush, who many consider one of the worst Presidents in our nation’s history, had such a following. These people are like Detroit Lions season-ticket holders—they will support the team even when it goes 0-16. However, most Americans are not like Lions fans; they want results, and they want action. Obama will need to act on his message of change in order to maintain the public support that was so apparent at his inauguration."
- Alessi, 1/25/09.

The vlogging and blogging have been a fun change of pace, but they have also provided an opportunity for deeper critical thinking on current events that we ordinarily discuss in a more off-hand manner. I intend to make this a regular staple of this class and would love to know how other teachers have used vlogs, particularly if the students have posted their own.
Posted by Detroit Sports Dork at 7:37 AM

This is exciting stuff to be sure, Mr. B, but I'm afraid that what I've latched onto is your comment about potential harm to AP test scores, especially considering that you teach a two-semester course. You seem to be saying that you share the concerns of other teachers (even if we don't have to worry about national tests): that tech takes time, and projects take time, and that even if students gain depth of knowledge in a specific area or two, it is at the expense of breadth of knowledge that some would consider important at this level of education.

Has your current experience changed your mind about that?

If we push a lot of it to the students' own time, I worry about the cumulative effect, with 5-7 classes assigning blogging or whatever, on their schedules. From my experience with my own children, I know that not all students are squandering their after school hours on Facebook.

A follow-up thought: at our school, we already have concerns about class time. With a push towards 21st century technology and a schedule that is right out of my own high school days (that would be the 70's), maybe we are trying to pour new wine into old skins. Maybe it's time to finally let go of the beloved off-days. I don't know, maybe every sixth day could be "project day." I realize that there would be consequences to consider if we ditch the current schedule. But I think it's an issue that should at least be addressed.

Great questions and many some good points. First, a clarification. I have been much more aggressive about using the internet in this year's AP class. When the students have laptops next year, I will improve many activities using technology. My experience with the bookless tenth grade class has given me considerable confidence about making technology fundamental to social studies. I am far less restrained by my former "if it ain't broke, don't fix it" mentality.

I see Web 2.0 technology as cracking open fossilized ideas about curriculum. Departments, units, and "class" time itself become anachronistic. I was at staff development meeting, yesterday, where we all pretty much agreed that resources like blogging and podcasting should be shared across departments so that the kinds of redundancies you are concerned about can be avoided. And of course, neither blogging nor podcasting require a face to face teacher contact with thirty pupils.

I am inclined to think that if we ever truly integrate project-driven learning into our curriculum, we will want to build much more flexibility into our meeting schedules. For example, the collaborative Civil Rights and Liberties projects I am starting in my classes next week, will call for much more virtual meeting time than face-to-face. Most of the face-to-face will involve the students teaching to each other the curriculum materials they have created. In such a circumstance it would be ideal if we had much more flexibility to meet as small groups when we needed. Thus, I see scheduling more general class time as undermining the laptop/wireless advantages.